Welcome to “The Baltics – Overcoming Occupation”

“The summer of 2015 took me to the relatively unknown Baltic region of Earth. Having travelled through former Soviet states in Central Asia, I was curious to explore a different area that had been under Moscow’s iron rule.

In the Baltics, there is no doubt of current regimes versus past. The region comprised of Lithuania (Vilnius), Latvia (Riga), and Estonia (Tallinn) have the unenviable position of being in a strategically valuable location on a map. A location that lies between two of the most historically aggressive countries on earth - Russia and Germany. The past 800 years have been like a see-saw between empires including Teutonic Knights, Tsarist Empires, Nazis, and most recently the Soviets.

Even though one has a tendency to lump these three nations together, they each offer a distinct culture and people. A unique instance of solidarity occurred on August 23, 1989, which was the fiftieth anniversary of the “non-aggression” Molotov-Ribbentrop Pact that secretly carved up Eastern Europe between Germany and Russia. On that day in 1989, an estimated two million people joined hands stretching out a human chain 675 km between the capitals of Tallinn to Vilnius. Coined “The Baltic Way” it exhibited to the world a Baltic region united and ready for their independence as the Soviet Union dissolved into ashes.

My itinerary was a mix of UNESCO old city centres to the remote agrarian countryside. It facilitated a perfect mix of 14th-century castles, windmills, museums, and lighthouses, sprinkled with culinary delights such as pig ears, beetroot soup, potatoes in every type of dish conceivable and thankfully lots of fresh seasonal fruit and fish to dot one’s plate.

Always seeking to find a taste of the “real” country I am travelling through, as I drove along the roads there were many signs of a past had been forced upon the Baltic population. Whether it was the ruins of former Soviet collective farmsteads or memorials from the Nazi occupation, the one constant was the people’s ability to overcome. I stumbled onto festivals and markets that demonstrated the pride, hospitality, and kindliness of the people.

Since all three countries are now proud NATO and EU members, travel and commerce between them is seamless. The images featured in this collection are a small sampling of the diverse and abundant life found in the region’s countryside. Enjoy! 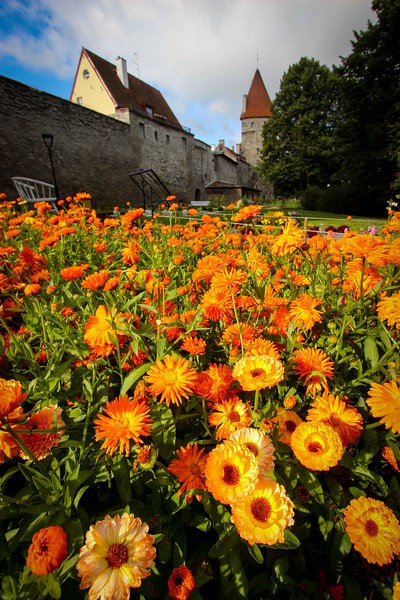 The Estonia capital city of Tallinn is world renowned for its walls. Starting in 1265 with the construction of the first five-meter-high Wall of Margaret, the old city slowly became encircled by walls, towers, and gates. Sixteen metres high, three metres thick, over four kilometres long and “featuring” 46 defence towers, by the 16th century the walls of Tallinn had evolved into one of the strongest fortresses in all of Europe. Modern times make for leisurely strolls through flower gardens and spinning up spiral staircases that take you to time in history where Rapunzel would have felt at home.